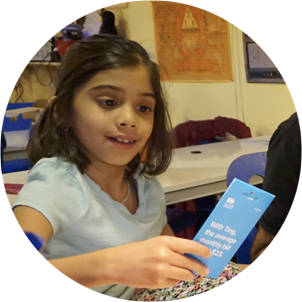 This seven year old girl was in our initial parent-kid phone classes in May 2016. Although our recommended age was 9 years and older, her father asked for permission for her to attend as she was a maker to the core and loved building stuff using littlebits. She rocked!

Two years ago, I envisioned building a non-rectangular smartphone for women. Not a typical dream for a stay-at-home-mom, but I was not your typical SAHM. I had taken electronics and programming courses in college as a part of my physics degree, so although it had been a while since those glory days, building a phone was not an idea that seemed completely unattainable to me (albeit a wacked-out, impossible notion to most of my friends). Fast forward to today and I am CEO and Founder of dTOOR, a company inspiring others to make non-rectangular phones for non-rectangular people, starting with the Cyrcle Phone.

In addition to conceiving the Cyrcle Phone, I am a huge advocate of each person taking technology into her own hands and crafting it to her own mobile needs. Fortunately, the tools have gotten easier and more accessible just in the last 2 years, thanks to several determined and hardworking people, making it possible for virtually anyone to build her own kit phone. I am here to highlight their efforts and tell you how your favorite child or adult can build her (or his) own phone, no matter what gender. In this article I speak to the female gender in the hopes that more girls and women will follow me, because the field of hardware and electronics is currently low in those with double X chromosomes.

Before we begin, it is important to point out that you will need a “GSM” SIM card for any of these kit phones. In the United States I currently use TING cards because you only pay for the minutes you use, and, in my experience and from what I have heard elsewhere, they have excellent customer service. However, any GSM SIM card will work.

Your nine year old can put together Seeed Studios’ RePhone Kit in less than 10 minutes. Yes, 10 minutes. Admittedly, most of that time is spent simply delighting in taking the components out of the box, along with the straightforward, Ikea-style instructional pamphlet. You may want to add a few more minutes for her to color the clever paper cover of the phone. The only potentially tricky part is telling the difference between the two smaller-sized grommets that attach the circuit boards to the paper cover. However, even if you mix up the grommets, the phone still works.

The best part of all is that the RePhone Kit is not as expensive as other phone kits.

The brilliant simplicity of Seeed Studios’ RePhone Kit is that there are only three boards, connected by two cables. The second brilliant part is that this 2G phone has a touchscreen, but does NOT have internet access on the base model – perfect for parents who are not quite ready to give their child pocket access to the internet 24x7.

The entertaining promotional videos for Seeed Studios’ RePhone Kit are here and here.

If your daughter absolutely loves the phone, and wants to do more than just call and text, you can surprise her with Seeed Studios’ RePhone Geo Kit, RePhone Lumi Kit, or additional modules which are brand-named “Xadow extensions” so that you can track her - or at least see her from a distance with the blinking lights.

Seeed Studios has been a solid player in the maker world of electronics since 2008, leading the way in producing maker boards for tiny spaces. Eric Pan and his team at Seeed Studio have been true nurturers of makers like myself by developing open hardware and hosting forums.

In Autumn 2015, Seeed’s very own Product Manager, Nosk Wu (who has changed teams since), and his team ran a Kickstarter campaign to release the RePhone Kit, which thankfully connected the dots in an affordable way for many of us struggling to develop phones for non-rectangular spaces.

If your daughter is a bit older and ready to get into 3D printing, may I not-so-humbly mention my own company’s phone, which was available on Kickstarter until September 30, 2016. The Cyrcle Phone is dTOOR’s bulky prototype version which we are developing into a sleek, round phone for ladies and gentlemen in the next 3-5 years. Unexpectedly, our simple prototype delighted both kids and grown-up makers as an easily customizable phone. The Cyrcle Phone was offered with the 2G RePhone Kit inside a non-conventional, circular case with a SIM card and a 2.5 hour class at makerspaces across the country. But more importantly, with your purchase we provided the 3D file so that your child could print the case in any color she wished (use www.3dhubs.com to find a hub near you if you do not have access to a 3D printer), or even modify the file herself using the free version of SketchUp software, to create a shape of her own design. Triangles, apples, or Star Wars figurines anybody?

If you have a daughter who is ready to do a bit of soldering and wants to gain more experience with the open-source Arduino Software (IDE), I recommend Ladyada’s Arduin-o-Phone, released over a year ago, in May 2015.

It is a sandwich consisting of an Adafruit Metro board (Arduino-based board), an Adafruit FONA 800 shield (the phone part), and a touchscreen. Your daughter will need to solder the headers, microphone, buzzer, and speaker. The price for the parts is approximately $120 or more, depending on which parts you select. It does not come with a case, but can be used without one due to the functional design.

As a woman or girl interested in electronics, it is satisfying to the nth degree to put together a phone kit created by an inspirational woman like Limor Fried, AKA “Ladyada”, who founded Adafruit in 2005. Her goal was to create the best place online for learning electronics and making the best designed products for makers of all ages and skill levels. Fried was the first female engineer on the cover of WIRED magazine and was awarded Entrepreneur magazine’s Entrepreneur of the year. Adafruit is a 100% woman owned company and as of last year, Adafruit started producing all the USA-made boards for Arduino. If you buy an Arduino in America this year, it has been made at Adafruit, with pride.

Perhaps the most incredible part is that Fried created the Arduin-o-Phone on her day off.

If your daughter is ready for a bigger soldering challenge and some experience sourcing parts, I recommend David Mellis’ DIY Cellphone from 2012. It’s a “candy bar” style phone without a touchscreen, but still extremely gratifying to assemble as it teaches you to pay attention to schematics and introduces you to several electronic part suppliers from which you will need to order the parts, which will total around $200. This is the phone I cut my teeth on, and one of the only pieces of open-source phone guidance around when I started. Some the of parts from Mellis’ Bill of Materials (BOM) list have been discontinued but if you look up the old part and examine the specifications, you can usually figure out which part you can substitute. If you have any questions, Mellis’ still monitors his webpage and fields the occasional post.

Mellis is one of the original creators of Arduino boards, and my hero for having his helpful “DIY Cellphone” website around when I needed it most. He has a history I envy, having completed his graduate studies at the MIT Media Lab, getting his PhD in Mitchel Resnick’s Lifelong Kindergarten group and his master’s in Leah Buechley’s High-Low Tech group. Prior to the Media Lab, he taught at the Copenhagen Institute of Interaction Design (Denmark). Last I heard he was a post-doc at UC Berkeley with Björn Hartmann. Berkeley is much closer to Seattle than Boston, so with luck one day we might even cross paths. Marcin Jakubowski filmed a casual video of Mellis in 2013 talking about the phone and his project which can be found here. In the video Mellis also mentions a product called, “MaKey MaKey” which is a simple invention kit for beginners and experts doing art, engineering, and everything in between.

All of the phones above are provided with basic software to make calls and texts. However, in each case your daughter can modify the software as she grows accustomed to designing technology around her needs. If she posts her explorations to the internet, please consider to have her ping one of dTOOR’s social media sites so we can see the results of her efforts, because we are eager to see and support female-engineered designs. Perhaps one day your daughter will make a phone for us all and I, for one, would like to say, “I knew her when…”

Until then, these are great phone kits to explore. Happy Building, Creating, and Exploring!